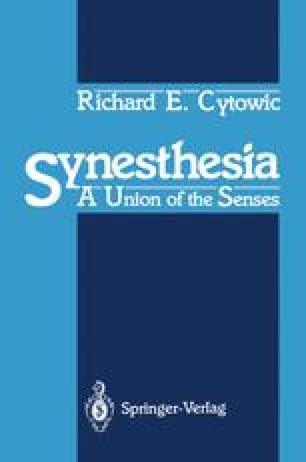 The main task of this chapter is to explore the claim, stated explicitly and implicitly and in several guises, that synesthesia is ultimately related to language. That is, it is assumed or surmised that the connection between a stimulus and the parallel synesthetic sense is brought about by a linguistic-based cross-modal association (D’Andrade & Egan, 1974; Karwoski et al., 1942; L.E. Marks, 1974, 1975, 1978; Ortmann, 1933; Osgood, 1960; Rader & Tellegen, 1987; Ries, 1969; Riggs & Karwoski, 1934; Vernon, 1930). I believe that this claim is erroneous. There is an enormously strong bias toward calling on language as an explanation for many cognitive functions. It is difficult to shun its appeal. Langfeld (1926), for example, stated that “synesthesia is not due to an organic condition of the brain, such as a ‘tangling of the fibers,’ but rather is a normal and essential function for the subject, a cognitive process differing in no respect from any other process of meaning.” Wheeler (1920) speaks of synesthesia as “an immediate and permanent conditioned reflex,” whereas for L.E. Marks (1975) synesthesia is “a cross-modal manifestation of connotative meaning in a pure sensory form.” This is pure conjecture.

Inferior Parietal Lobule Semantic Space Association Cortex Language Module Semantic Differential
These keywords were added by machine and not by the authors. This process is experimental and the keywords may be updated as the learning algorithm improves.
This is a preview of subscription content, log in to check access.