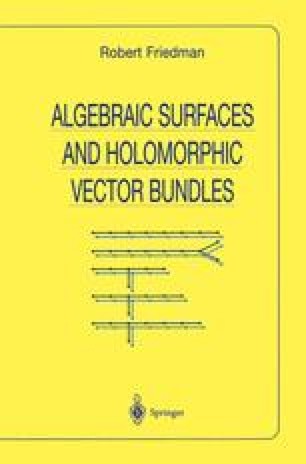 The study of algebraic surfaces is by now over one hundred years old. Many of the fundamental results were established by the Italian school of algebraic geometry, for example Castelnuovo’s criterion for a surface to be rational (1895), the theorem of Enriques that a surface is rational or ruled if and only if P4 or P6 is zero (1905), and in general the role of the canonical divisor in the classification of surfaces. This theory was reworked from the modern perspective of sheaves, cohomology, and characteristic classes in a series of papers by Kodaira (1960-1968) and by the Shafarevich seminar (1961-1963). In particular, new ideas were developed to attack those questions in the classification theory which had proved resistant to the synthetic techniques of the Italian school, for example the classification of elliptic surfaces or the structure of the moduli space of K3 surfaces and its relationship with the period map. Another deep result which seems to be inaccessible to the classical methods is the Bogomolov-Miyaoka-Yau inequality c 1 2 ≤ 3c2. Moreover, the new methods could be extended to the study of compact complex surfaces (Kodaira) or algebraic surfaces in positive characteristic (Mumford and Bombieri-Mumford). Despite the great progress in understanding algebraic surfaces, many open questions remain. For example, the fundamental problem of whether there exists a classification scheme of some sort for surfaces of general type seems to require a completely new insight.

Modulus Space Vector Bundle Line Bundle Chern Class Algebraic Surface
These keywords were added by machine and not by the authors. This process is experimental and the keywords may be updated as the learning algorithm improves.
This is a preview of subscription content, log in to check access.