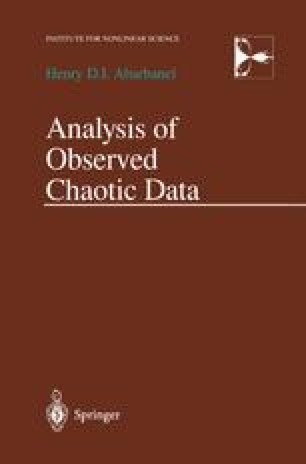 Invariants of the Motion

Classifying the dynamical systems that one observes is a critical part of the analysis of measured signals. When the source of the signals is linear, we are used to the idea of identifying the spectral peaks in the Fourier spectrum of the signal. When we see a spectral peak at some frequency, we know that if we were to stimulate the same system at a different time with forcing of a different strength, we would see the spectral peak in the same location with possibly a different integrated power under the peak. The Fourier frequency is an invariant of the system motion. The phase associated with that frequency depends on the time at which the measurements begin, and the power under the peak depends on the strength of the forcing. Since chaotic motion produces continuous, broadband Fourier spectra, we clearly have to replace narrowband Fourier signatures with other characteristics of the system for purposes of identification and classification. The two major features which have emerged as classifiers are fractal dimensions and Lyapunov exponents. Fractal dimensions are characteristic of the geometric figure of the attractor and relate to the way points on the attractor are distributed in d E -dimensional space. Lyapunov exponents tell how orbits on the attractor move apart (or together) under the evolution of the dynamics. Both are invariant under the evolution operator of the system, and thus are independent of changes in the initial conditions of the orbit, and both are independent of the coordinate system in which the attractor is observed. This means we can evaluate them reliably in the reconstructed phase space made out of time delay vectors y(n) as described above. This is good news as it implies we can evaluate them from experimental data.

Fractal Dimension Lyapunov Exponent Strange Attractor Average Mutual Information Lorenz Attractor
These keywords were added by machine and not by the authors. This process is experimental and the keywords may be updated as the learning algorithm improves.
This is a preview of subscription content, log in to check access.