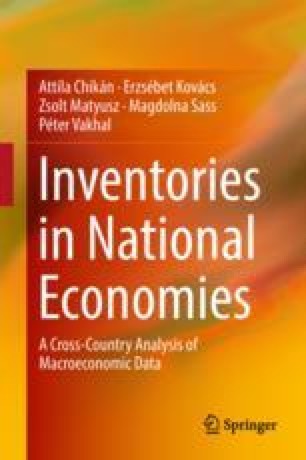 The most aggregate view of inventory investment tendencies of our set of countries is the one looking at the average of country-wise annual inventory investment over the investigated time horizon. Having the complete data set of the 20 TMEs for the full time horizon, it is possible to see the main tendencies. In Sect. 4.1, we analyse the aggregate inventory behaviour. We start with the 20 TMEs over the full time horizon, and then, we close in on the second sub-period and add the other 6 TMEs and 6 PSEs to the set of countries. The focus is on the examination of the mean and standard deviation of aggregate dI/GDP. After that, we continue with a country-level analysis of dI/GDP, again investigating the 20 TMEs first, and then add the other countries. We explore the main tendencies through descriptive statistics, and we visualize the relationship between the mean and standard deviation of dI/GDP.

By definition, a time series follow an autoregressive process if its future values can be estimated from its own past values. In order to model such progressions, time series must be stationary, and for simplicity, it should have zero mean. Stationary time series can be modelled by three ways:
These models form an equation in which the dependent variable is a linear combination of its past values and a stochastic term. Formally in case of an AR(p) model, p is the lag operator which defines how long the process should “look back”:
$$ X_{t} = c + \sum^{p}_{i=1} \varphi_{i} X_{t-i} + \varepsilon_{t} $$

φ i : autoregression coefficient of Xt−i.

In case of stationary process, all roots of the characteristic polynomial must lie outside of the unit root, where z is the variable of the associated polynomial.

In case of these kinds of models, the key assumption is that the output variable is a linear combination of the white noise which oscillates around the mean. The general equation of an MA(q) process, where q is the lag operator, is the following:
$$ X_{t} = c + \varepsilon_{t} + \sum^{q}_{i=1} \theta_{q} \varepsilon_{t-i} $$

θ i : autoregression coefficient of εt−i.

Notations are equivalent with the AR and MA model’s indices.

ARIMA processes are special cases of nonstationary time series, where stationary is achieved by differencing (integrating) variable X. The level of integration (d) equals with the number of differentiations.

Order of lags can be visually determined by autocorrelation (ACF) and partial autocorrelation (PACF) functions or algorithmically by information criteria functions. The two methods are not necessarily equivalent.