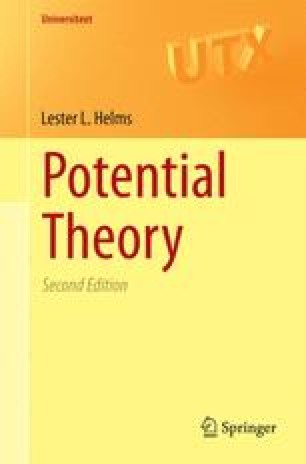 In 1828, Green used a physical argument to introduce a function, which he called a potential function, to calculate charge distributions on conducting bodies. The lack of mathematical rigor led Gauss in a 1840 paper to propose a procedure for finding equilibrium distributions based on the fact that such a distribution should have minimal potential energy. This led to the study of the functional \(\int (G - 2f)\sigma \,dS\) where \(\sigma \) is a density function, \(G\) is a Green function, \(f\) is a continuous function, and \(dS\) denotes integration with respect to surface area on the boundary of a conducting body. Gauss assumed the existence of a distribution minimizing the functional. Frostman proved the existence of such a minimizing distribution in a 1935 paper. After defining the energy of a measure, properties of energy are related to capacity and equilibrium distributions. The chapter concludes with Wiener’s necessary and sufficient condition for regularity of a boundary point for the Dirichlet problem.

Calculated Charge Distribution Minimum Potential Energy Vague Convergence Norm-bounded Sequence Regular Boundary Point
These keywords were added by machine and not by the authors. This process is experimental and the keywords may be updated as the learning algorithm improves.
This is a preview of subscription content, log in to check access.