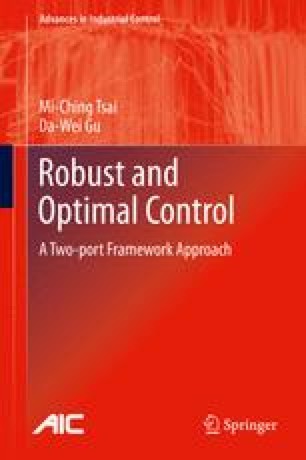 The chain scattering-matrix description (CSD) of a two-port network, first introduced in Chap. 2, originated from the conventional electrical circuit theory. In contrast to the LFT, the CSD developed in the network circuits provides a straightforward interconnection in a cascaded way. The CSD can transform an LFT into a two-port network connection and vice versa. Thus, many known results which have been developed for a two-port network can then be used in control system analysis and synthesis. Due to its benefits of describing a linear system, the CSD was later extended to the design of robust control systems [1, 2], where different structures of the CSD were investigated. In this chapter, the CSD will be formally defined and explored for transformations and the descriptions of state-space realizations. The J-lossless and dual J-lossless systems are defined in this chapter. J-lossless and dual J-lossless both play an important role in the CSD control system manipulations, analysis, and synthesis. In particular, the properties of J-lossless and dual J-lossless are essential in synthesizing H ∞ (sub)optimal controllers using the CSD approach.

Chain Scattering State-space Realization Star Product Coprime Factorization Lower Triangle Matrix
These keywords were added by machine and not by the authors. This process is experimental and the keywords may be updated as the learning algorithm improves.
This is a preview of subscription content, log in to check access.