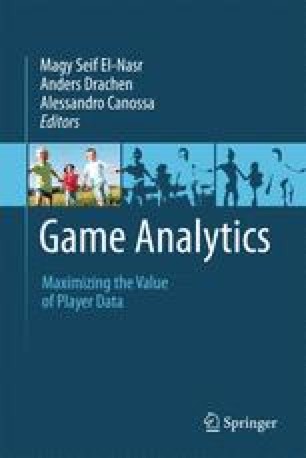 There are different types of telemetry and metrics systems employed within the game industry, reflecting the varied usage scenarios across different game forms and formats, as well as the different stakeholders involved. In this chapter the main focus is on telemetry applied towards developers, here termed “developer-facing telemetry”, and the system we have established at Bioware to facilitate developer-facing telemetry. The main goal of the system is to facilitate and improve the production process, gathering and presenting information about how developers and testers interact with the unfinished game. This contrasts user-facing telemetry, which is typically collected after a game is launched and mainly aimed at tracking, analyzing and visualizing player behavior (see Chaps. 4,5 and 6). In this chapter, I describe the developer-facing component of the SkyNet system developed at Bioware, and our experiences developing and using the system.

Telemetry System Game World Issue Report Game Session Issue Tracking
These keywords were added by machine and not by the authors. This process is experimental and the keywords may be updated as the learning algorithm improves.
This is a preview of subscription content, log in to check access.

Georg Zoeller worked as Principal Designer at BioWare and contributed to the release of Neverwinter Nights: Hordes of the Underdark, Jade Empire, Mass Effect and Dragon Age: Origins and Star Wars: The Old Republic since joining the industry in 2003. He relocated to Singapore mid 2012 to become Technical Creative Director for Ubisoft Singapore.