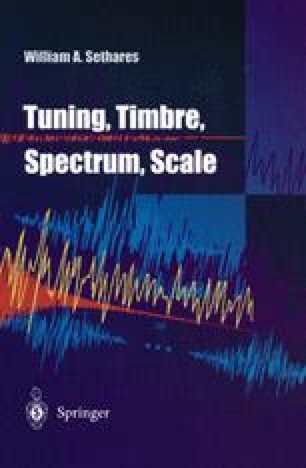 Throughout the centuries, composers and theorists have wished for musical scales that are faithful to the consonant simple integer ratios (like the octave and fifth) but that can also be modulated to any key. Inevitably, with a fixed (finite) scale, some intervals in some keys must be compromised. But what if the notes of the “scale” are allowed to vary? This chapter presents a method of adjusting the pitches of notes dynamically, an adaptive tuning, that maintains fidelity to a desired set of intervals and can be modulated to any key. The adaptive tuning algorithm changes the pitches of notes in a musical performance so as to maximize sensory consonance. The algorithm can operate in real time, is responsive to the notes played, and can be readily tailored to the spectrum of the sound. This can be viewed as a generalized “dynamic” just intonation, but it can operate without specifically musical knowledge such as key and tonal center, and is applicable to timbres with nonharmonic spectra as well as the more common harmonic timbres.

Scale Step Musical Knowledge Adaptive Tuning Tonal Center Major Chord
These keywords were added by machine and not by the authors. This process is experimental and the keywords may be updated as the learning algorithm improves.
This is a preview of subscription content, log in to check access.