Controversies and Innovations in Urological Surgery 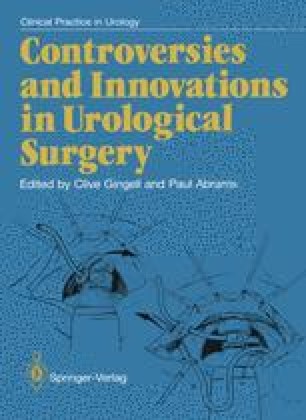 Controversies and Innovations in Urological Surgery pp 293-300 | Cite as

Encouraged by the low morbidity and high degree of subjective contentedness achieved in adult patients who had undergone bladder augmentation or continent urinary diversion using the Mainz pouch, we began applying the same technique with increasing frequency in children. Initial disease in a series of 11 children treated with this technique consisted of functional or morphological iatrogenic bladder loss in 6, neurogenic bladder dysfunction caused by myelomeningocele in 4 and failed reconstruction of bladder exstrophy in 1. Of these, seven children received bladder augmentation, combined with undiversion in two cases. The remaining four children, who had suffered from appliance problems related to a wet stoma (ureterocutaneostomy, three; colonic conduit, one), received a Mainz pouch to create a continent urinary diversion. The main reasons for reoperation in this patient group were incontinence or problems with the care of a wet urostomy. In six patients, hydronephrosis, reflux or recurrent pyelonephritis had already involved the upper urinary tract. The preoperative details of the 11 children are summarised in Table 25.1. To illustrate the problems found in these children, two patients are described in detail:

Urinary Diversion Bladder Augmentation Bladder Exstrophy Bilateral Hydronephrosis Spastic Diplegia
These keywords were added by machine and not by the authors. This process is experimental and the keywords may be updated as the learning algorithm improves.
This is a preview of subscription content, log in to check access.