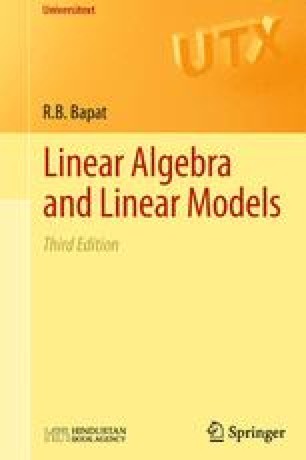 Basic properties of the multivariate normal distribution are proved. The independence of quadratic forms and the independence of a quadratic form and a linear form in a multivariate normal are characterized. The matrix version of the Cochran’s Theorem is formulated with a succinct proof. The results are applied to the one-way and two-way classification, with and without interaction. The general linear hypothesis is considered and the corresponding F-test is developed. Maximum likelihood estimates of the parameters in a linear model are obtained. The multiple correlation coefficient is defined and its relation with the F-statistic for the significance of the regression coefficients is proved.

Quadratic Form Conditional Distribution Positive Semidefinite Maximum Correlation Multivariate Normal Distribution
These keywords were added by machine and not by the authors. This process is experimental and the keywords may be updated as the learning algorithm improves.
This is a preview of subscription content, log in to check access.