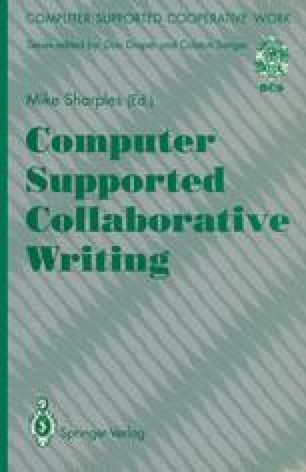 A Survey of Experiences of Collaborative Writing

This chapter reports on a survey of the experience of collaborative writing of twenty-three largely academic co-authors. It was found that discussions took place during writing more than before (or after) writing, and that adherence to an initial plan was not seen as an important determinant of success. Different leadership types existed in the writing groups reported on in this survey, including self-appointed leader and no leader at all. Fluctuating membership and commitment to the writing group were shown to be common. The emerging picture of the collaborative writing reported on by these respondents is one of a dynamic process with continuous negotiation and re-negotiation of questions relating to both the contents of the document, and to a range of other issues, such as leadership role and sharing of responsibilities between the co-authors. Implications for the design of computer systems for collaborative writing, such as the necessity for support of the dynamic structure of writing groups, are discussed.

Group Membership High Standard Deviation Initial Plan Computer Support Writing Process
These keywords were added by machine and not by the authors. This process is experimental and the keywords may be updated as the learning algorithm improves.
This is a preview of subscription content, log in to check access.