Artifical Intelligence, Culture and Language: On Education and Work 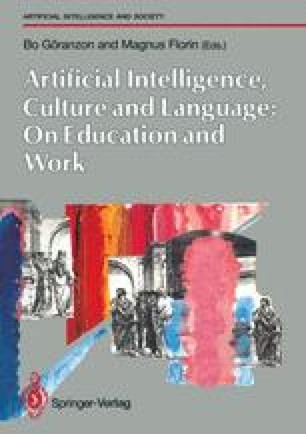 Artifical Intelligence, Culture and Language: On Education and Work pp 23-34 | Cite as

Cognitive Science and the Computer Metaphor

The core ideology of cognitive science is that the mind functions like a digital computer, whereby mental states are computational states and mental processes are computational processes. From where is this metaphor derived? The brain has in the past been likened to many things, e.g. the telephone switchboard, telegraph system and so on. The arguments in support of the computer metaphor are numerous. They are based on conceptions of intelligent behaviour, the likening of the mind to an information processing system, assumptions about the ability to make calculations, the neglect of common-sense thinking, the belief in internal theories of human behaviour, and the “discovery” of formal rules of language. These assumptions and beliefs all face serious problems, as strongly argued in this chapter. For example, the concept of a “rule” is also problematic. It cannot be applied to humans in the same way as it is to a machine. The “rule” of computation is not a rule at all; it is a formal procedure through which the machine goes. The computational metaphor is also an easy solution to the mind-body problem. However, this solution accepts the worst assumption of dualism. It assumes that the mind is something formal, abstract and non-material, and not part of the ordinary physical-biological world in which we live. If, though, one assumes that mental processes are part of biological natural history, then there is no mind-body problem.

Information Processing Cognitive Science Semantic Content Turing Test Mind Function
These keywords were added by machine and not by the authors. This process is experimental and the keywords may be updated as the learning algorithm improves.
This is a preview of subscription content, log in to check access.

Cite this chapter as:
Searle J.R. (1990) Cognitive Science and the Computer Metaphor. In: Göranzon B., Florin M. (eds) Artifical Intelligence, Culture and Language: On Education and Work. The Springer Series on Artificial Intelligence and Society. Springer, London. https://doi.org/10.1007/978-1-4471-1729-2_4