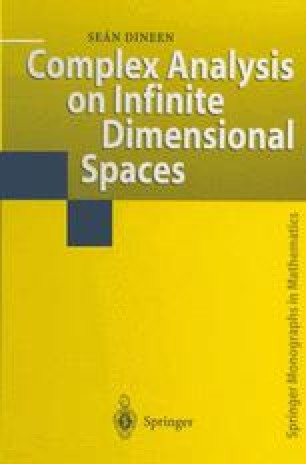 In comparing locally convex space structures on spaces of holomorphic functions in previous chapters we relied on expansions which converged everywhere, at least pointwise, to the functions under consideration. This confined our investigation to balanced domains but allowed us to make effective use of concepts and techniques developed in linear functional analysis. This approach is no longer adequate for arbitrary open sets and it is necessary to introduce ideas and methods of a non-linear kind which originated in several complex variables theory. These were associated in the finite dimensional theory with the Cartan-Thullen Theorem, the Levi problem and the ∂ problem and were developed by exploiting the algebraic structure of the space of holomorphic functions and the principle of analytic continuation. Neither of these arise in studying linear functions or polynomials since polynomials can always be extended to the whole space and the space of n-homogeneous polynomials is not an algebra under pointwise multiplication.

Open Subset Compact Subset Convex Space Plurisubharmonic Function Continuous Norm
These keywords were added by machine and not by the authors. This process is experimental and the keywords may be updated as the learning algorithm improves.
This is a preview of subscription content, log in to check access.