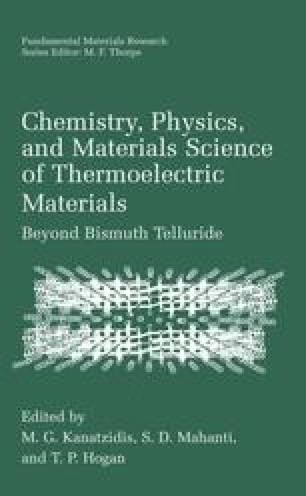 Over the past several years, skutterudite compounds have been extensively studied due to their high thermoelectric performance in the intermediate temperature range between 500 K and 1000 K.1-5Potential automotive applications of these materials include waste heat recovery from exhaust gases and radiators. For example, the exhaust temperature of a four-cylinder engine under normal operating conditions is about 800 K, a temperature at which high thermoelectric figure of merit is observed for skutterudite compounds. In addition to the broad materials studies, prototype generators were built in the US,6,7Japan,8,9and Europe.10CoSb3-based skutterudites have particularly been the focal point of research mainly because of the abundance of the constituent elements. The chemical formula for binary skutterudites is MX3, where the metal atom M can be Co, Ir or Rh, and the pnicogen atom X can be P, As, or Sb. Binary skutterudite compounds crystallize in a body-centered-cubic structure with space group Im3,and the crystal structure contains large voids at the apositions (12-coordinated); each M atom is octahedrally surrounded by X atoms forming a MX6octahedron (see Fig. 1). They are semiconductors with small band gaps (~ 100 meV), high carrier mobilities, and modest thermopowers. Detailed structural and electronic properties can be found in two recent reviews.11,12Despite their excellent electronic properties, they possess thermal conductivities (~ 10 W/mK at room temperature) that are too high to compete with the state-of-the-art thermoelectric materials.