Symmetry, Group Theory, and the Physical Properties of Crystals 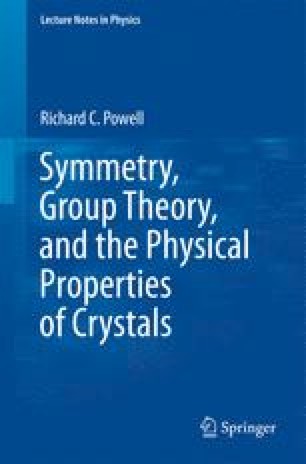 Symmetry, Group Theory, and the Physical Properties of Crystals pp 79-104 | Cite as

The properties of solids can be altered by substituting a small concentration of a different type of ion for one of the normal ions of the host lattice. This is referred to as doping the solid and is the key to important applications such as solid state laser materials and microelectronics based on n‐ and p‐type doping of semiconductors. The dopant ion can be either at a normal lattice site or at an interstitial site. It acts like a point defect in the host material and its properties are determined largely by its interaction with its nearest‐neighbor ions. The maximum possible concentration and the uniformity of the distribution of dopant ions are determined by the compatibility of the size and valance state of the ion compared to the host lattice ion it is replacing. As an example of the importance of symmetry in determining the properties of doped solids, the case of optically active ions in crystal hosts is described here. To introduce this topic, Sect. 4.1 provides a brief overview of the electronic properties of free ions. Following that, it is shown how group theory is used to determine the number and types of energy levels of these ions in different crystalline environments, and the selection rules for electronic transitions between their energy levels.

Irreducible Representation Crystal Field Orbit Interaction Angular Momentum Quantum Number Spherical Harmonic Function
These keywords were added by machine and not by the authors. This process is experimental and the keywords may be updated as the learning algorithm improves.
This is a preview of subscription content, log in to check access.