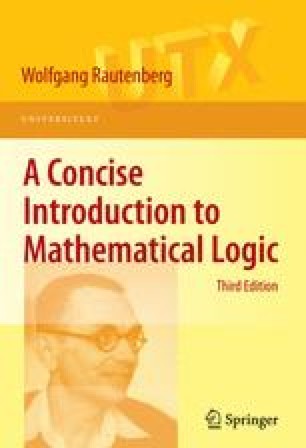 A Concise Introduction to Mathematical Logic pp 41-90 | Cite as

Linguistic particles such as “for all” and “there exists” (called quantifiers) play a central role here, whose analysis should be based on a well prepared semantic background. Hence, we first consider mathematical structures and classes of structures. Some of these are relevant both to logic (in particular model theory) and to computer science. Neither the newcomer nor the advanced student needs to read all of 2.1, with its mathematical flavor, at once. The first five pages should suffice. The reader may continue with 2.2 and later return to what is needed.

Free Variable Propositional Logic Axiom System Explicit Definition Constant Symbol
These keywords were added by machine and not by the authors. This process is experimental and the keywords may be updated as the learning algorithm improves.
This is a preview of subscription content, log in to check access.