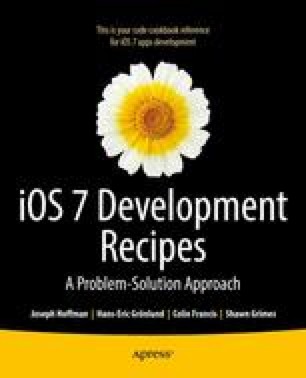 In this chapter, we will explore UIKit, Quartz 2D, and Core Graphics. We’ve already used UIKit to create windows, buttons, and views. Quartz 2D is a rendering engine on which UIKit is built. Quartz 2D is part of the Core Graphics framework, and together they can help a developer create impressive views and interfaces. Any time you see an impressive custom interface such as Evernote, which looks completely different from the standard Apple interface, you can bet Core Graphics played a big part in making it happen. As a developer, you can use Core Graphics to customize virtually any aspect of your interface by subclassing existing Apple elements, such as buttons and table view cells.

Call Function Current Context Simple Shape Screen Shot Preceding Recipe
These keywords were added by machine and not by the authors. This process is experimental and the keywords may be updated as the learning algorithm improves.
This is a preview of subscription content, log in to check access.