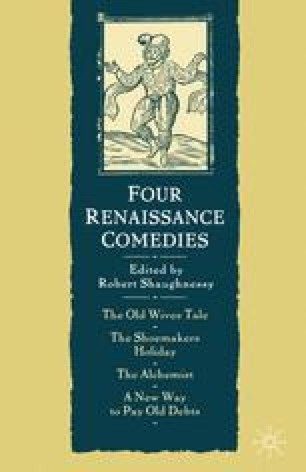 A New Way to Pay Old Debts A Comedy

A New Way to Pay Old Debts was probably written in the mid-1620s; it was entered in the Stationers’ Register on 10 November 1632, and published in quarto in 1633. According to the title page of the first edition, the play ‘hath often been acted at the Phoenix in Drury Lane, by the Queen’s Majesty’s servants’: the company was formed following Charles I’s marriage to Henrietta Maria of France in 1625, and a plague epidemic in London during the summer of that year brought about the closure of the theatres. Its author, Philip Massinger (born 1583) had been part of Philip Henslowe’s stable of playwrights since at least 1613; he had been educated at Salisbury grammar school and Oxford University, but left without completing his degree. Like many of his dramatist colleagues, he spent some of his early career in debtors’ prison, scraping a living by collaborating with, amongst others, John Fletcher, Thomas Dekker and Thomas Middleton, and contributing to over fifty plays during a period of thirty years. From 1615 onwards he worked for the King’s Men, eventually assuming from John Fletcher the mantle of chief dramatist (which Fletcher had inherited from Shakespeare). The performance of New Way by the Queen Majesty’s company was something of an exception in terms of the overall pattern of Massinger’s career, in that from 1626 to 1634 he wrote exclusively for the King’s Men. He died in 1640.

Loud Music Young Gentleman Parting Excuse Theatrical City Young Lover
These keywords were added by machine and not by the authors. This process is experimental and the keywords may be updated as the learning algorithm improves.
This is a preview of subscription content, log in to check access.