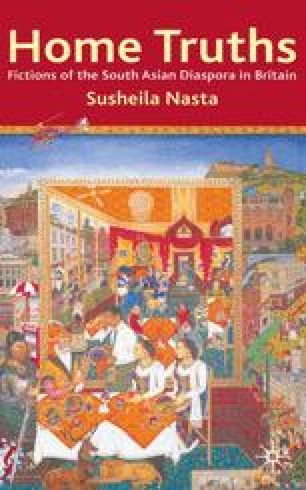 ‘Homing In’: Opening Up ‘Asian’ Britain in Hanif Kureishi and Ravinder Randhawa

In a suggestive essay named after the northern town of Bradford, Hanif Kureishi has explored the uncomfortable terrain of a hybridity which is ‘Englishness’ for a new generation of Asians born and raised in Britain. Kureishi’s portrait of Bradford as a ‘microcosm’ for what he calls the potential of a ‘larger’ Britain, a Britain that might acknowledge its cultural and racial diversity as being inside rather than outside its borders, points to some of the major preoccupations of his art, as well as those of a number of other contemporary Asian British writers. The discordant polarities of the world Kureishi exposes in Bradford are both exhilarating and threatening; it is the home of competing racist groups — whether white, black or Asian — the birthplace of the Yorkshire Ripper, the site of British workingmen’s clubs, deprived white housing estates, boarded up ‘Asian’ houses, Pakistani taxi drivers with Yorkshire accents, single sex Muslim schools.

Asian Woman Asian Community Past Life Woman Writer Hybrid Space
These keywords were added by machine and not by the authors. This process is experimental and the keywords may be updated as the learning algorithm improves.

It is the British, the white British, who have to learn that being British isn’t what it was. Now it is a more complex thing involving new elements. So there must be a fresh way of seeing Britain and the choices it faces: and a new way of being British after all this time.

All ‘Asians’ are ipso facto British Asians, indeed they are only ‘Asians’ because they are British ‘Asians’. Being ‘Asian’ is always already a hybrid form, a condition of cultural bilingualism, or … perhaps polylingualism.

England’s Indian writers are by no means … the same … [They] include political exiles, first generation migrants, affluent expatriates whose residence here is frequently temporary, naturalized Britons, and people born here who may never have laid eyes on the subcontinent … fiction is in future going to come as much from addresses in London, Birmingham and Yorkshire as from Delhi and Bombay.