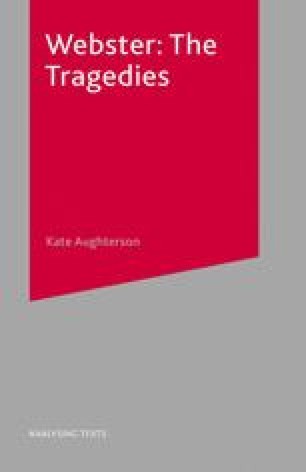 John Webster was born in about 1578 and died in 1634, his life spanning the reigns of Elizabeth I, James I and Charles I. The first records of his working life as a playwright begin in 1602, at the very end of Elizabeth’s reign. His plays continued to be performed in repertory until and beyond his death, although the last play he wrote was in 1627 (Appius and Virginia). The range and nature of the plays he wrote across his career can illuminate his two tragedies. He only wrote one other play as a sole author: his others were all collaborative, written jointly with other playwrights. His other sole-authored play, The Devil’s Law Case, is a tragicomedy, setting up potentially tragic situations and conflict, which are magically resolved and transformed by a surprise ending. He wrote this play after his two tragedies, in 1617 or 1618, and its combination of tragic intensity, with comic closure and a burlesque, often macabre, jokiness has similarities with both the structure and content of the two tragedies. We shall return to these similarities in a moment, when we come to discuss the relationship of the two tragedies to his whole career’s work. However, let us first have a look at a probable chronology of his work, and comment on both his working methods and the range and types of writing in which he was engaged over twenty-five years of writing.

Family Business Political Corruption Good Play Roman History History Play
These keywords were added by machine and not by the authors. This process is experimental and the keywords may be updated as the learning algorithm improves.
This is a preview of subscription content, log in to check access.