The Evolution of the Law and Politics of Water 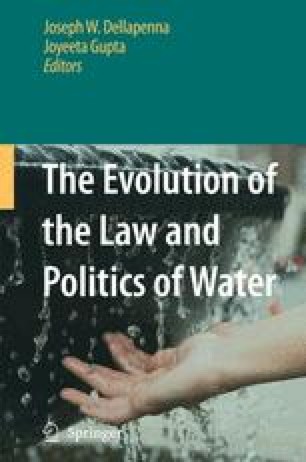 Water in the Jewish Legal Tradition

The Torah—the five books of Moses—is the basis for Jewish law. To this day, all judgements handed down by the Jewish rabbinic courts derive their legitimacy by tracing their origins back to the Torah. In Jewish Law, water is symbolic of life. The importance of water quality and the dangers of drinking polluted water appear from the earliest period of Jewish history. While Jewish law allows private ownership of wells, a spring that flows beyond the area of the spring itself is considered, like rivers and the sea, to be in the public domain. The Talmud—Rabbinical commentaries on the Torah—generally adopts a system of water management that gives parties closer to a water source priority over those further away, and upstream riparians priority over lower riparians. Modern Israeli water law has little relation to Jewish water law. But because both have their roots in the same land, with the same dry climate and limited water sources, both developed laws in an attempt to ensure proper protection of water sources.

Cite this chapter as:
Laster R., Aronovsky R.D., Livney D. (2009) Water in the Jewish Legal Tradition. In: Dellapenna J.W., Gupta J. (eds) The Evolution of the Law and Politics of Water. Springer, Dordrecht