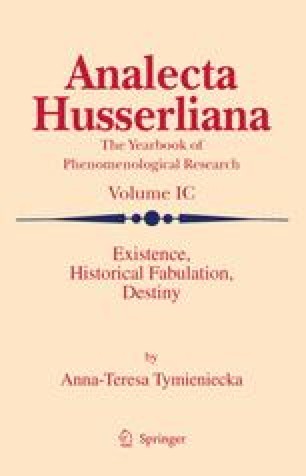 On the Modern Opposition of Fate, Destiny, Life, Doom and Luck in the Light of Henry James’s The Portrait of a Lady

We shall set out through the five sections of this paper the opposition that structures the existence of the modern or rather average individuality, which lies in the impossibility of conciliating the objective or properly sociohistorical determinations thereof (which is what in other times was called “fate”) with its subjective or psychological framework (that is to say, the “destiny” that each tries to build up by himself). This is due to the pretension for the part of the individual of a self-rule that is not conceived however in accordance with the formal universality of reason but with the material particularity of imagination and desire, whose dialectics prevents the identification of the two planes that we have just mentioned, which is a condition of the modern culture that plays havoc with the traditional order of existence and with the concomitant valuation of functions and personal aims. Of course, this explains why life is for the modern culture a lot more dramatic, passional and sorrowful than what it was for Antiquity. Now, the analysis of this phenomenon is developed through the novel of James because, according to our approach, the phenomenon at issue is all the more perceptible in the case of a feminine consciousness since women were until some decades ago supposed to maintain and hand down the ideal framework of existence, which contradicts point by point the pretension of having an original destiny. The development of all this leads to the aberrant metamorphosis of liberty into a doom that at firs sight seems to be unavoidable, which explains why infelicity, far from being accidental or dispensable, appears all of a sudden as the utmost object of desire for whom is after a full life, which goes hand-in-hand with the tenant that everyone is doomed to endure a meaningless wretchedness even in the middle of the best material and cultural conditions, whereby a rampant nihilism rides roughshod over whatever idealization of existence. However, precisely because of the lack of an ideality, the own dynamics of the process allows to resort to the unforeseeable possibilities wherewith luck transmogrifies even the most baneful life.

Native Land Modern Culture Full Life Moral Valuation Feminine Role
These keywords were added by machine and not by the authors. This process is experimental and the keywords may be updated as the learning algorithm improves.
This is a preview of subscription content, log in to check access.

Cite this chapter as:
Gerald Rivas V. (2009) On the Modern Opposition of Fate, Destiny, Life, Doom and Luck in the Light of Henry James’s The Portrait of a Lady. In: Existence, Historical Fabulation, Destiny. Analecta Husserliana (The Yearbook of Phenomenological Research), vol 99. Springer, Dordrecht. https://doi.org/10.1007/978-1-4020-9802-4_25