Efficiency Instead of Justice? 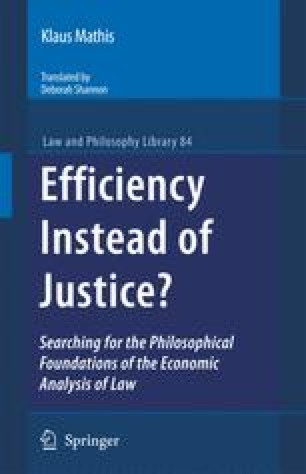 Efficiency Instead of Justice? pp 7-30 | Cite as

Economic analysis of law is based on the use of the economic model to explain human behaviour. It thus makes use of the analytical tools of microeconomics. Microeconomic theory takes individual economic agents as the starting point of analysis. In contrast, the Keynesian theory which dominated economics in the mid-20th century was founded on macroeconomic models. That is to say, analysis was applied to the interrelationships between economic macrovariables, e.g. between interest rates and investment, the rates of unemployment and inflation, or between public spending and economic growth. Keynesian economic policy failed because of the naive belief that an economic system could be controlled like a machine. The major downfall of ‘hydraulic Keynesianism’ was its lack of a microfoundation – the fact that it was not underpinned by any theory of human behaviour. While economists in the field of macroeconomics differ on many issues, ‘neoclassical’ microeconomic theory is the acknowledged tool of every economist. The microeconomic approach is based on the economic paradigm.

Marginal Utility Prospect Theory Loss Aversion Indifference Curve Marginal Revenue
These keywords were added by machine and not by the authors. This process is experimental and the keywords may be updated as the learning algorithm improves.
This is a preview of subscription content, log in to check access.