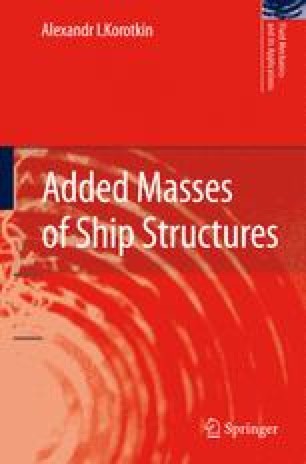 From the general expressions for added masses of a solid body moving in fluid (1.12) one sees that the added masses and moments can be computed if one knows the potentials of velocity fields arising in the fluid under the motion of the body along and around coordinate axes. Therefore, the problem of computation of added masses involves solving the Laplace equation with given boundary conditions on the surface of the body and at infinity. The methods of solutions of the Laplace equation which are most commonly applied in hydrodynamics are the method of separation of variables and the singularity method [Anderson, W.J., Shah, G.N.: Park Jungsun, Added mass of high-amplitude balloons. J. Aircraft 32(2), 285–289 (1995); Lamb, G.: Hydrodynamics. Cambridge University Press, Cambridge (1932); Lojcjanskij, L.G.: Mechanics of Fluid and Gas. Nauka, Moscow (1970), in Russian]. According to the method of separation of variables, the general solution of a Laplace equation is represented as a sum of particular solutions with constant coefficients, which are defined from the boundary conditions. In this method it is convenient to use an orthogonal curvilinear coordinate system chosen such that one of the coordinate “planes” coincides with the surface of the body. For example, the problem can be solved in a relatively simple way for ellipsoids if one uses an elliptic coordinate system. For an arbitrary body of revolution the solution is rather complicated [Lojcjanskij, L.G.: Mechanics of Fluid and Gas. Nauka, Moscow (1970), in Russian]; the solution can be simplified assuming that the length of the body is large compared to its width.

Rectangular Plate Laplace Equation Plane Section Oblate Spheroid Give Boundary Condition
These keywords were added by machine and not by the authors. This process is experimental and the keywords may be updated as the learning algorithm improves.
This is a preview of subscription content, log in to check access.