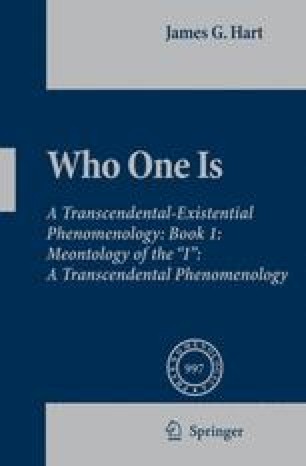 The Death of the Transcendental Person

Here we discuss the puzzling but uniquely certain (in the natural attitude) phenomena of birth and death. (The reflection on the realization of “one’s own death” is postponed to Book 2.) The paradox of the transcendental person is evident in the tension between, in the natural attitude, the undeniable uniquely certain knowledge of the temporal finitude of persons, i.e., their mortality, and the transcendental-phenomenological position that the awareness of the beginning and ending of the I is not presentable or conceivable. The transcendental I’s awareness of temporality and its temporalizing is oddly non-temporal, and for it to experience its beginning it would have to be prior to its beginning and to experience its end it would have to be after its ending. Whether this non-temporal knowing of temporality ought to be named an experience of eternity seems doubtful. The fundamental issue is whether it could begin and end without knowing itself to begin and end. Even if this is conceptually possible transcendental phenomenology must deny that phenomenological evidence for this is possible.

Natural Attitude Musical Piece Worldly Event Temporal Object Transcendental Phenomenology
These keywords were added by machine and not by the authors. This process is experimental and the keywords may be updated as the learning algorithm improves.
This is a preview of subscription content, log in to check access.