Carbon and Nitrogen in the Terrestrial Environment 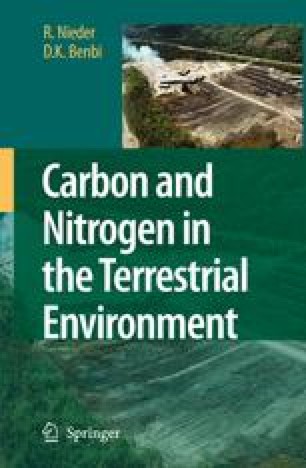 At the outset it is important to clarify the terms soil organic matter (SOM) and humus. Sometimes it is a matter of confusion as chemists and biologists look into soil organic matter with different perspective. In the glossary of soil science terms (SSSA, 1997) soil organic matter is defined as the organic fraction of the soil exclusive of undecayed plant and animal residues and is considered synonymous with humus. However, other definitions of SOM have been used by numerous authors. Schnitzer (2000) referred to soil organic matter as the sum total of all organic carbon- containing substances in the soil, which comprises of a mixture of plant and animal residues in various stages of decomposition, substances synthesized microbiologically and/or chemically from the breakdown products, and the bodies of living and dead microoragnisms and their decomposing remains.

For characterization and functional purposes, SOM is generally subdivided into different fractions or compartments. The approaches for fractionation may broadly be categorized as chemical, physical and biological or biochemical. Additionally, some morphological characteristics are also used to distinguish the development of different humus forms in terrestrial ecosystems. Since SOM is a continuum of complex heterogeneous material, no single fractionation approach may be expected to adequately characterize the turnover rates of the whole soil. In this chapter, we discuss different chemical and physical organic matter fractions and morphological humus forms. The biological or functional pools, that are mostly model-defined and may or may not be related to some chemically or physically defined fractions are discussed in Chapter 9.

Soil Organic Matter Humic Substance Humic Acid Fulvic Acid Particulate Organic Matter
These keywords were added by machine and not by the authors. This process is experimental and the keywords may be updated as the learning algorithm improves.
This is a preview of subscription content, log in to check access.