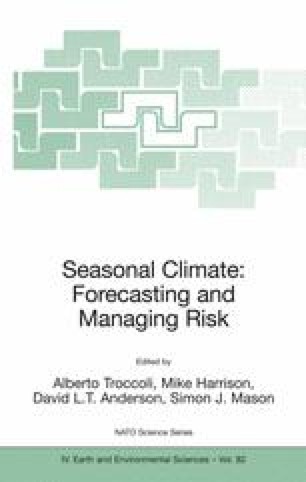 An Introduction to Probability Forecasting

This chapter reviews the basic probability concepts needed to understand probability forecasting and presents some simple Bayesian approaches for producing well-calibrated probability forecasts. Forecasts are inherently uncertain and it is important that this uncertainty is estimated and communicated to forecast users so that they can make optimal decisions. Forecast uncertainty can be quantified by issuing probability statements about future observable outcomes based on current forecasts and past observations and forecasts. Such probabilistic forecasts can be issued in a variety of different forms: as a set of probabilities for a discrete set of events; as probabilities for counts of events; as quantiles of a continuous variable; as interval forecasts (pairs of quantiles); as full probability density functions or cumulative distribution functions; or as forecasts for whole spatial maps. Since models predict the future state of model variables rather than actual real-world observable variables, probability forecasts need to be recalibrated on observations as an inherent part of the forecasting process. Rather than the (marginal) pro bability distribution of ensemble predictions, what forecasters should issue are estimates of the conditional probability distribution of the future observed quantity given the available sample of ensemble predictions.

Prediction Interval Probability Forecast Conditional Probability Distribution Ensemble Prediction Brier Score
These keywords were added by machine and not by the authors. This process is experimental and the keywords may be updated as the learning algorithm improves.
This is a preview of subscription content, log in to check access.