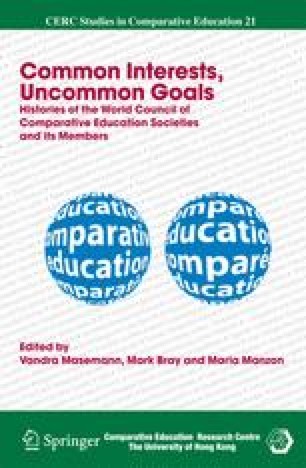 The Australian Comparative Education Society (ACES) was founded in 1973. Beginning as a national society in Australia, it soon formed links with scholars in neighbouring New Zealand. In its 10th year, the society became a regional body and was renamed the Australian and New Zealand Comparative and International Education Society (ANZCIES). It was the second regional member society of the World Council of Comparative Education Societies (WCCES), after the Comparative Education Society in Europe (CESE). At the 2006 annual conference, participating scholars from Australia, New Zealand, Fiji, Papua New Guinea, Indonesia, Korea, Japan and Vietnam called for ANZCIES to become even more regionally representative. This call may portend a new era for comparative and international education in the region, and echoed earlier proposals to hold conferences in Fiji as a means to foster regional participation. Although still of modest size, ANZCIES has exercised strong influence in comparative and international scholarship, and is helping to develop a new generation of internationallyoriented scholars throughout the Asia-Pacific region.

This history has been compiled largely through the recollections of ANZCIES members who have remained with the society since its beginnings, from a search through minutes of meetings and members’ personal archives, and through the annual conference proceedings where available. ANZCIES has not maintained full records of its history, but it is hoped that the society will continue to gather historical and contemporary data as a result of this WCCES Histories Project.

Annual Conference Intercultural Communication Australian Council Education Society Peace Education
These keywords were added by machine and not by the authors. This process is experimental and the keywords may be updated as the learning algorithm improves.
This is a preview of subscription content, log in to check access.