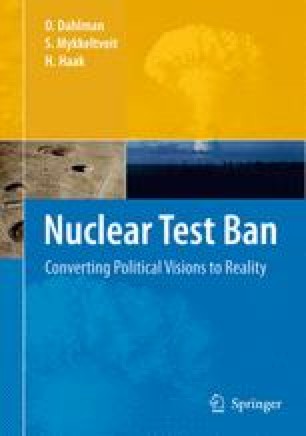 To Test or Not to Test

On July 16, 1945 the world changed and on August 6 the world knew. The “Trinity” nuclear test in the Alamogordo desert in New Mexico, USA marked the beginning of the military nuclear era. The destruction of the Japanese cities of Hiroshima on August 6 and of Nagasaki on August 9, 1945 demonstrated the overwhelming power of this new weapon. These explosions marked the end of the Second World War and the beginning of a nuclear arms race: an arms race that divided the world between those having nuclear weapons and those that decided not to have them or that so far have been unable to acquire them. Eight States have conducted in all more than 2000 nuclear test explosions involving some 2400 nuclear devices. The USA and the former Soviet Union have carried out the lion’s share of these tests.

Nuclear Weapon Nuclear Explosion Nuclear Test Fissile Material Ballistic Missile
These keywords were added by machine and not by the authors. This process is experimental and the keywords may be updated as the learning algorithm improves.
This is a preview of subscription content, log in to check access.