Spatial Planning for a Sustainable Singapore 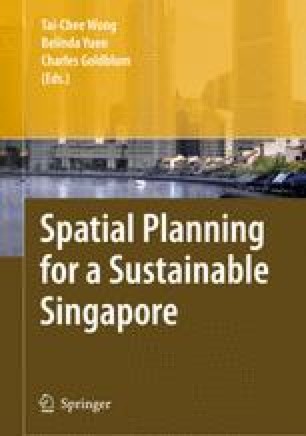 Spatial Planning for a Sustainable Singapore pp 135-150 | Cite as

Public Housing in Singapore: A Sustainable Housing Form and Development

Singapore’s monumental achievements in public housing have dumbfounded supporters and critics alike. Many praise the Singapore government for transforming a tiny, overcrowded, poor and slum-ridden, Third World island into a spotless haven for foreign investors within a space of 25 years (see Dale 1999; Wong and Guillot 2005). Today, 85 percent of Singapore’s population reside in high-rise flats designed and built by the Housing and Development Board (HDB). Some 92 percent of HDB’s residents own their apartment units, leaving only eight percent as renters. Having virtually achieved a “roof over every head” (see Wong and Guillot 2005), Singapore’s public housing programme is impressive in ownership access in a citystate with a high population density of 6,220 per square kilometre. Right from the early 1960s, high-rise, high-density public housing model has been adopted in order to satisfy the housing demand. This model is expected to continue in a sustainable way, and would be the principal housing form to meet future needs.

However, how and why high-density living has started out as the provision of basic housing needs and has, over time, evolved into a sophisticated political and social engineering process associated with a model of sustainable housing merits further investigation. From land-saving initiatives, Singapore’s high-rise and highdensity public housing has captured a greater concern and debate about its sustainability since the energy crisis of the 1970s. There is an evolutionary process in terms of the form of sustainable housing. The present chapter is organised in three dimensions of analysis about sustainability. Firstly, it is the social sustainability that was imprinted in the origin of the public housing of affordability, through the central provident fund’s self-financing mechanism. Public housing has been made operational and as a function of social infrastructure to act as a social stabilizing agency. Secondly, public housing has been built into the frame of economic sustainability in which Singapore’s nation-building and growth-driven economic system has been strongly associated with its industrialization and urbanization processes. Public housing has also acted as a generator for domestic demand of building materials, professional and sub-professional services and other contractual works. In so doing, HDB as the public provider at moderate and affordable costs for the populace has made the statutory board a sizeable agency of employment (see Phang 2001). Environmental sustainability is the third issue. As a useful instrument in countering urban sprawls (see Simmonds and Coombe 2000; Ravetz 2000), the Singapore highdensity and high-rise model has been equipped with ample open space and greenery at ground level and it has become a compromised form of land use intensification and artificial greenery provision in a Western-modelled landscaped living space.

Public Housing Social Housing Housing Policy Social Sustainability Oily Sludge
These keywords were added by machine and not by the authors. This process is experimental and the keywords may be updated as the learning algorithm improves.
This is a preview of subscription content, log in to check access.