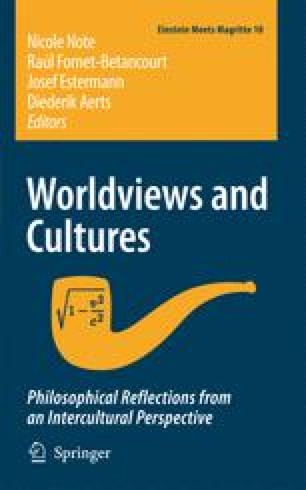 Worldviews and Cultures pp 1-9 | Cite as

Worldview and Cultures: Philosophical Reflections from an Intercultural Perspective. An Introduction

As editors, we realise that compiling a book is not self-evident. We began with clear guidelines and a straightforward idea of how the book ought to be composed. The potential authors received the guidelines and enthusiastically began their articles. When the articles were received, however, we noticed that some of the authors had deviated from the initial directives. We then had a choice: ask the author to rewrite the piece, or creatively try to make the article fit one of the three questions we posed. Since the articles indeed were very interesting, we decided to accept them in the final form in which they were written, even if we do not necessarily agree on all the viewpoints they articulate. A number of points we did discuss with some authors in cases where we disagreed. We believe, for example, that some written statements can be considered ethnocentric in an implicit way. However, we preferred not to publish these interactions as part of the book, since most of the authors had already taken our suggestions into account anyway.

The starting point for the book is “worldviews”. For us, a worldview reflects what generations of people have experienced, prior to any conceptual notions. These pre-conscious “experiences” have been and continue to be translated into comprehensible orderings which subconsciously explain how the world ontologically is, becomes, or is experienced. An example of these core beliefs in Western culture is the idea of the substantiality of each being. From these core beliefs, interpretations are deduced on a semi-conscious level, such as the autonomy of people. Both the notion of substantiality and autonomy manifest themselves culturally in language, in institutional structures, in daily habits and cultural traditions, in rules and norms. Once a person is embedded in these basic assumptions, it will be difficult to “believe” other ordenings. Yet, in spite of deeply branched articulations and their long-lasting nature, beliefs may change over long periods of time. This is because the ongoing interaction with other cultures and experiences within one's own culture, and personal lives, constantly reshape worldviews in an uncontrollable way.

Basic Belief Western Philosophy Core Belief Arabic Language Philosophical Reflection
These keywords were added by machine and not by the authors. This process is experimental and the keywords may be updated as the learning algorithm improves.
This is a preview of subscription content, log in to check access.