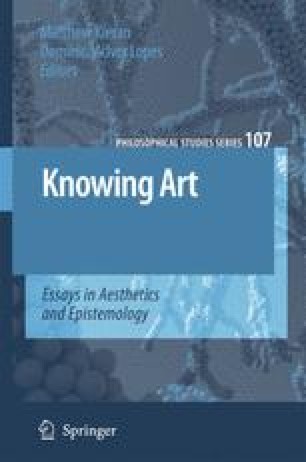 It is not unusual for a reader of a novel, especially that of the nineteenth century variety, to assume that, in reading, she is acquiring important insights into human beings. Yet philosophers have often found this assumption problematic. Most agree that fiction can be a source of psychological understanding, either explicitly, via psychological descriptions of characters, or implicitly, via the construction of psychological character portraits. However, there is disagreement about the importance of fiction’s potential contribution in this area.

Some have suggested that the psychological information presented in a work of fiction could not reasonably strike a reader as true without the reader having come across it already in some other non-fictional context. Jerome Stolnitz represents this view when he writes: “Art, uniquely, never confirms its truths. If [on reading Jane Austen] we find that stubborn pride and ignorant prejudice sometimes keep attractive men and women apart, we find the evidence for this truth about the great world in the great world” (1992: 198; see also Diffey 1995: 210). Meanwhile, Noël Carroll suggests that, in the moral realm, which presumably includes the realm of moral psychology, “if… learning is a matter of the acquisition of interesting propositions heretofore unknown… then… there is no learning when it comes to the vast majority of narrative artworks” (1998: 141). In contrast, others have cast fiction as a potentially ‘self-sufficient’ source of psychological understanding (Robinson 1995; Conolly and Haydar 2001: 119).

Moral Judgment Propositional Attitude Fictional Character Propositional Knowledge Moral Concept
These keywords were added by machine and not by the authors. This process is experimental and the keywords may be updated as the learning algorithm improves.
This is a preview of subscription content, log in to check access.