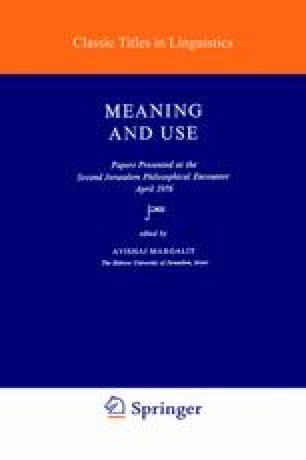 My subject in this paper is particular possibilities: the may-bes and the might-have-beens that relate essentially to particular individuals or situations. The topic is one which is apt to evoke very different responses from different philosophers. Some detect, or think they detect, an intoxicating scent of something more metaphysically interesting than either merely epistemic possibilities on the one hand or merely de dicto possibilities or necessities on the other. My remarks will not give much satisfaction to them. Some, on the other hand, are suspicious of modalities in general as being dubiously coherent notions. But it is clear that whether we believe there are such things as particular possibilities or not, we are in practice bound to take account of them.

Blow Down Rational Inference Past Situation Electoral Committee Intelligence Officer
These keywords were added by machine and not by the authors. This process is experimental and the keywords may be updated as the learning algorithm improves.
This is a preview of subscription content, log in to check access.