Asia-Pacific Coasts and Their Management 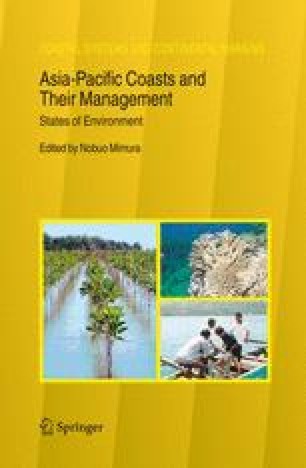 Asia-Pacific Coasts and Their Management pp 1-5 | Cite as

Introduction: Scope and Objectives of This Book

Coastal zones in Asia and the Pacific are extremely diverse in their characteristics. They range from polar to tropical regions, large areas of which are under the strong influence of Asian monsoons, tropical cyclones, and interannual variability imposed by the El Niño-Southern Oscillation (ENSO). Various geomorphologic features also occur, including deltas formed by large rivers, islands, and rocky coasts. These are often accompanied by valuable ecosystems of mangroves, coral reefs, and sea grass beds. Numerous large rivers in Asia discharge large amounts of freshwater and sediments to the sea, with such sediments accounting for about 70% of the world freshwater flow Coastal ecosystems are home to a rich biodiversity and a wealth of biological resources that include abundant fishery resources for commercial and subsistence fisheries.

Coral Reef Tropical Cyclone Coastal Zone Pacific Region Asia Pacific Region
These keywords were added by machine and not by the authors. This process is experimental and the keywords may be updated as the learning algorithm improves.
This is a preview of subscription content, log in to check access.