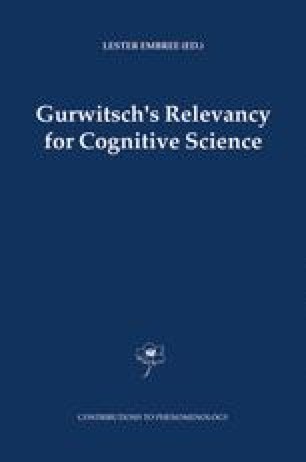 Kinds of Knowledge: Phenomenology and the Sciences

For Aron Gurwitsch, phenomenology was a science, albeit of a special kind. It was neither an empirical science, like physics or psychology, nor a formal science, like mathematics. Our essay seeks to clarify some features of this special science and its relationships to other kinds of knowledge. The relationship of phenomenology to empirical psychology is explored by following Gurwitsch’s amplifications of the rejection of the “constancy hypothesis” by Gestalt psychologists. The main components of a distinctively phenomenological method are then explicated. In Gurwitsch’s later articles, under the influence of Husserl’s The Crisis of European Sciences and Transcendental Phenomenology, there emerges a phenomenological theory of all the sciences. We sketch that theory, focusing especially on Modern “naturalism.” This focus allows us to draw implications for the contemporary project of “naturalizing the mind.”

Mental Process Scientific Experience Mental Life Phenomenological Method Transcendental Phenomenology
These keywords were added by machine and not by the authors. This process is experimental and the keywords may be updated as the learning algorithm improves.
This is a preview of subscription content, log in to check access.