Environmental Change and its Implications for Population Migration 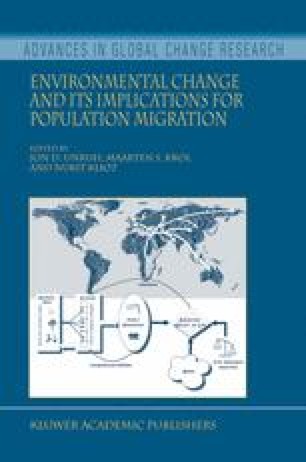 Human activities in most parts of the world are transforming the global environment. Ecosystems subjected to the stresses of global environmental change become more susceptible to the emergence, invasion, and spread of opportunistic species. When subject to multiple stresses, natural environments may exhibit reductions in resilience and regenerative capabilities. It is sometimes assumed that the time scales associated with environmental change are long and that, in many situations, the environment may find a new equilibrium, if not its original state. Environmental upheavals have occurred in the past, along with species extinctions, and yet the planet has “survived” and evolution has continued. However, it is possible, that anthropogenic pressures are accelerating change and that many systems may not adapt to rapid rates of change, even if they could adapt to the amplitude of change over longer time periods.

In this paper it will be shown that, in one form or another, environmental change and its impacts on the basic resources for human sustenance have in the past been a dominant driving force behind population migrations. It will then be suggested that accelerating global change in the 21st century may lead to situations where it once again becomes the major cause for outmigration from particular regions. Migrations recorded during the 19th and 20th centuries, on the other hand, are embedded within complex political, social, and economic contexts and are not solely driven by adverse environmental factors. Some of the 20th century migrations may well have underlying environmental causes as well, but these causes are difficult to disaggregate from the other factors. The subtle links between economic, political, and environmental causes of migration will certainly be present in coming decades, but in some instances the environmental factor may dominate once again in the future as it did in the past.

Population Migration Global Environmental Change Displace Person East African Rift Forced Migration
These keywords were added by machine and not by the authors. This process is experimental and the keywords may be updated as the learning algorithm improves.
This is a preview of subscription content, log in to check access.