Logic, Epistemology, and the Unity of Science 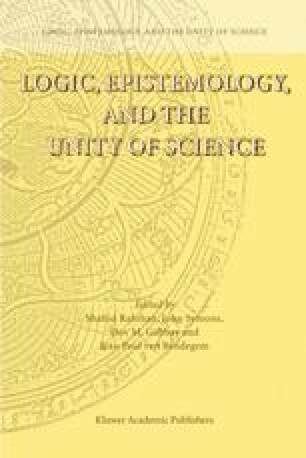 Logic, Epistemology, and the Unity of Science pp 3-15 | Cite as

Logic, Epistemology and the Unity of Science: An Encyclopedic Project in the Spirit of Neurath and Diderot

Chapter
Part of the Logic, Epistemology, And The Unity Of Science book series (LEUS, volume 1)

The idea that the unity of science can be achieved by means of logical analysis, an idea widely associated with the Vienna Circle, has fallen into disrepute. Today, logic plays a relatively minimal role in mainstream philosophy of science and no single approach to logic or semantics can claim to dominate the field. Logic, according to popular wisdom, has done more harm than good, abstracting us from the important subtleties of scientific investigation and mistakenly forcing a frozen universal structure on the dynamic process of knowledge-seeking. While many philosophers of science have shied away from logic there have, in the meantime, been many important new developments in logic, some of which may have extremely significant applications to questions in epistemology and general philosophy of science. These developments have gone virtually unnoticed in the broader philosophical community. One of the purposes of this volume is to encourage philosophers to recognize the potential riches to be found in recent work in logic, for instance in the plethora of non-classical logics, including, prominently, game theoretical semantics and independence-friendly logic. The rhetoric of systemati-city and formalism continues to characterize analytic philosophy of science and it is likely that the gradual withering of logic as a significant part of the philosophy of science is due more to neglect than to any serious argument.

By contrast, there has been no shortage of arguments against the notion of unity. It has been subject to ceaseless attack in recent history and philosophy of science. Evidence of the disunity of the sciences has been easy for critics to muster and arguments against specific attempts to achieve the unity of science are often quite devastating. However, while some of these criticisms are sound and will give pause to any prospective unifier, it is a mistake to ignore the preponderance of unified theories in science.1 Much of the development of physics in the second half of the twentieth century was motivated by the desire to unify quantum mechanics and general relativity. It would be difficult to understand the conceptual framework or the historical development of quantum field theory or string theory without recognizing the important role of unification in science. One can find many other important examples that show the abiding interest in, and heuristic function of, unification in scientific practice.

Analytic Philosophy Logical Positivist Vienna Circle Philosophical Community French Tradition
These keywords were added by machine and not by the authors. This process is experimental and the keywords may be updated as the learning algorithm improves.
This is a preview of subscription content, log in to check access.