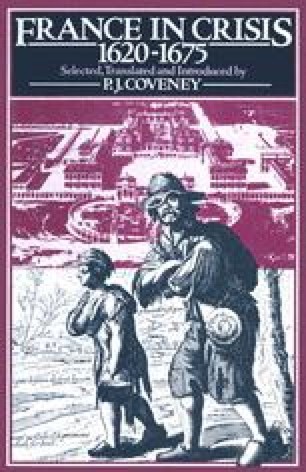 The French seventeenth century has been a major interest among European historians since the Second World War. The reason for this, at least in part, is that the seventeenth century saw the formation of the French ancien régime and occupies therefore a determining position in the transformation of the late-medieval constitution in France into the political society we term absolutism. Much of the history, however, remains controversial, even in its widest and deepest issues. Are we indeed justified in speaking in terms of ‘crisis’ in relation to any part of the century? Did the economic expansion of the ‘long sixteenth century’ come to a close in France in the 1630s and 1640s, giving way to a period of economic contraction? What was the relation of the monarchy to the dominant elements within the French state, and what were the relationships between those elements themselves, especially between ‘sword’ and ‘robe’? What was the nature of the constant popular unrest which disturbed France for so long? Was seventeenth-century France still a ‘feudal’ society, in which the political state was merely the instrument of a ‘feudal’ élite in achieving the defeat of the popular masses? Or, conversely, had the monarchy become associated with elements of the bourgeoisie, either through venality or mercantilism, thereby transforming the late-feudal character of the monarchical state by ending the political monopoly of a traditional feudal class?