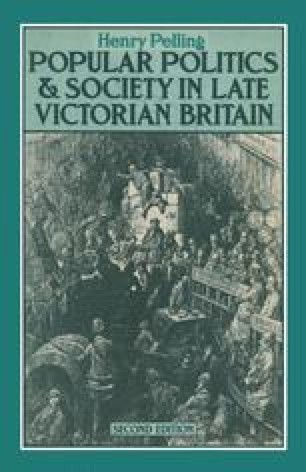 The years 1911–14 are marked in British history not only by the deepening crisis over the question of Irish Home Rule and by the increasing violence of the militant suffragettes, but also by the period of ‘labour unrest’, which involved bitter strikes, several of them national in character and requiring intervention by Cabinet ministers. In the course of the period a new philosophy of industrial action for political ends came into prominence; and at the same time a remarkable extension of the frontiers of trade unionism took place. Contemporaries cast around for explanations of these phenomena. Sir George Askwith, the government’s chief industrial adviser, reported to the Cabinet in 1911 that the probable main causes were the rise in the cost of living, and the failure of wages to keep pace; the conspicuous display of luxury by the rich, particularly exemplified in the use they made of motor-cars; and the growth of the press and the improvement of communications, which made for greater national co-ordination of news and activity.1 Other, less well-informed observers added to this list of causes, without however producing any that seem more plausible.2

Trade Union Real Wage Union Membership Labour Party Miner Federation
These keywords were added by machine and not by the authors. This process is experimental and the keywords may be updated as the learning algorithm improves.
This is a preview of subscription content, log in to check access.