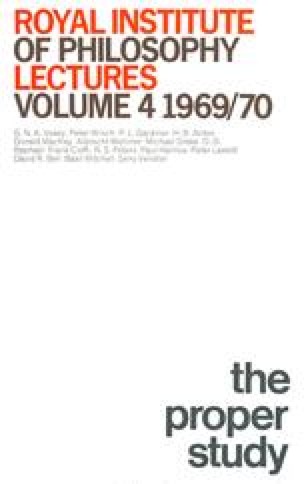 Some things are pervasive and yet elusive. If it can be agreed that the concept of my title and its instances are of this kind, then the observation may serve to justify the present enterprise. The elusive-ness of authority is that so often pursued in philosophical enterprise, namely the repeated confident use of a general term by even the unsophisticated, accompanied by the Socratic puzzlement that sets in as soon as a rationale or account of this use is sought. Such puzzlement in the case of the concept of authority is likely to provoke a Cephalitic reaction (this being a coinage to denote those who depart to their mundane duties so that the world may continue to revolve while the philosophers discuss its revolution (vide Plato, Republic bk 1)).

Primary Sense Political Authority Primary Knowledge Imperative Account External Examiner
These keywords were added by machine and not by the authors. This process is experimental and the keywords may be updated as the learning algorithm improves.
This is a preview of subscription content, log in to check access.