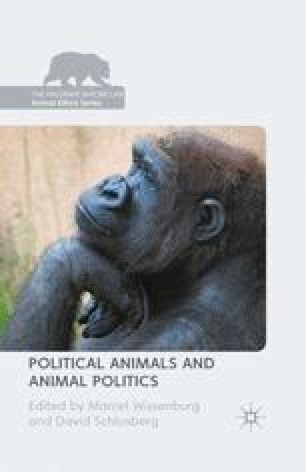 In her last book, Environmental Culture. The Ecological Crisis of Reason, Val Plumwood (2002: 8–9) identifies the vital two-fold task of i) ‘(re)situating humans in ecological terms’, and ii) resituating ‘nonhumans in ethical terms’. While the former appears ‘more urgent and self-evident, the task of prudence’, the latter tends to be considered secondary, ‘as optional, as supererogation, the inessential sphere of ethics’ (Plumwood 2002: 9). In fact, as Plumwood emphasises, and as this chapter will explain, the two tasks are inextricably linked, and the latter is not secondary at all. The title of this volume, Political Animals and Animal Politics, can be understood to simultaneously echo, but also politicise and combine Plumwood’s corresponding two tasks. On the one hand, it reminds us that humans are clearly animals of sorts and thus intrinsically — ecologically — a part of what tends to be thought of as ‘separate’ nature, while on the other hand, it points to the possibility of integrating other animals into our thinking about politics. As the complexly intersecting and difficult-to-predict effects of anthropogenic ecological crises — not only climate change — upon human and nonhuman nature become apparent, we are confronted with the task of moving beyond the separation of nature/culture so as to integrate not only other animals into our thinking about politics, but all of nonhuman nature, too.