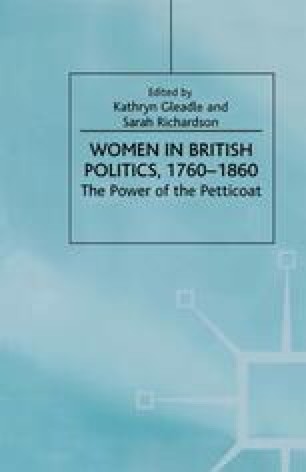 That the opportunities for women’s participation in political activity before 1860 were limited has been noted by a range of historians: scrutiny of membership lists of party associations, pressure groups, trade unions and other formal political groupings has shown the extent of the institutional exclusion of women. Adverse conclusions have thus been drawn about women’s role in political life and therefore in the public sphere. Comparisons of the decades before 1860 and those that directly followed it have emphasised the limits rather than the opportunities for women and a distinct contrast has been drawn between the extent of men’s and women’s varying levels of involvement in public life.1 However, political scientists examining women’s activities in contemporary politics have stressed the inadequacy of such crude number-counting exercises when attempting to quantify or assess the penetration of women in the political world, and have argued for the need to construct new models of political behaviour which challenge rather than conform to the accepted wisdom of politics as a male-dominated arena. These models stress that it is in the informal and ad hoc arenas where women’s participation is most striking. To some extent this is a corollary of women’s exclusion from public life but it is also an indication of where women’s interests lie. Political activity for women is thus based around the family, the neighbourhood and the local community, dependent on casual and kinship contacts rather than organised meetings, and not in the more visible national public arenas.2