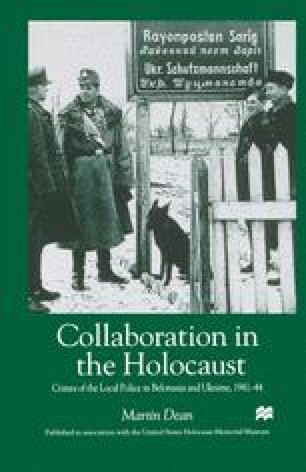 Collaboration in the Holocaust pp 17-40 | Cite as

On 22 June 1941, early in the morning the Germans attacked our territory. There were lots of gun shots. Many Russian soldiers were killed… these were border guards… Many houses were destroyed but the majority remained standing. The Russians retreated and by 10am that same morning the Germans had taken over this area.1 This was how one local Belorussian recalled the opening of ‘Operation Barbarossa’. The German invasion of the Soviet Union began with a surprise attack. During the night hundreds of German aircraft could be heard overhead roaring towards their targets in the east.2 Between 3.00 and 3.15am an overwhelming artillery bombardment opened up across the River Bug.3 Shortly afterwards German armoured forces and infantry crossed the Soviet frontier.