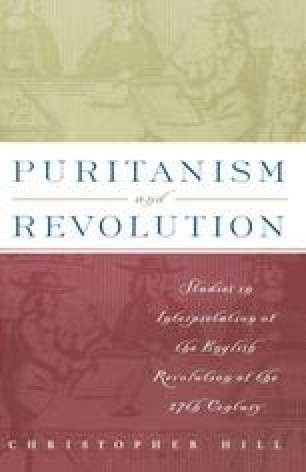 Theories of lost rights, of a primitive happy state, have existed in nearly all communities. The Fall of Man; the Golden Age; Arcadia; the Noble Savage — all these in their different ways express a belief that inequality and the exploitation of man by man have a historical origin, and a hope that the period of equality which survived in popular imagination may one day be restored. In England the peasant rebels of 1381 asked

‘When Adam delved and Eve span

Who was then the gentleman?’

A century and a quarter later Henry VII’s minister listed among the enemies of tranquillity a character called Arrogancy, who said to the common people, ‘Ye be the children and right inheritors to Adam, as well as they [the gentry]. Why should they have these great honours, royal castles, and manors, with so much lands and possessions, and ye but poor cottages and tenements?’1 This ‘old seditious argument’, as it appeared to a Royalist, was still being used in 1641: ‘We are all the sons of Adam, borne free; some of them say, the Gospell hath made them free. And Law once subverted, it will appeare good equitie, to such Chancellours, to share the earth equally. They will plead Scripture for it, that we should all live by the sweat of our browes’.2

Seventeenth Century French Revolution English Constitution Historical Essay Arbitrary Taxation
These keywords were added by machine and not by the authors. This process is experimental and the keywords may be updated as the learning algorithm improves.

My Nation was subjected to your Lords.

It was the force of Conquest; force with force

Is well ejected when the Conquer’d can.

Oh, where is the justice of old?

The spirit of Alfred the Great?

Ere the throne was debas’d by corruption and gold,

When the people were one with the state?

’Tis gone with our freedom to vote….

William Hick, ‘The Presentation of the National Petition’,