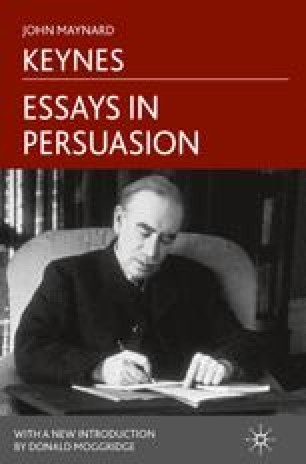 Economic Possibilities for Our Grandchildren

We are suffering just now from a bad attack of economic pessimism. It is common to hear people say that the epoch of enormous economic progress which characterised the nineteenth century is over; that the rapid improvement in the standard of life is now going to slow down—at any rate in Great Britain; that a decline in prosperity is more likely than an improvement in the decade which lies ahead of us.

Foreign Investment Economic Problem Sixteenth Century Economic Necessity East India Company
These keywords were added by machine and not by the authors. This process is experimental and the keywords may be updated as the learning algorithm improves.

This essay was first presented in 1928 as a talk to several small societies, including the Essay Society of Winchester College and the Political Economy Club at Cambridge. In June 1930 Keynes expanded his notes into a lecture on ‘Economic Possibilities for our Grandchildren’ which he gave at Madrid. It appeared in literary form in two instalments in the Nation and Athenaeum, 11 and 18 October 1930, in the midst of the slump.