Women in Britain since 1900 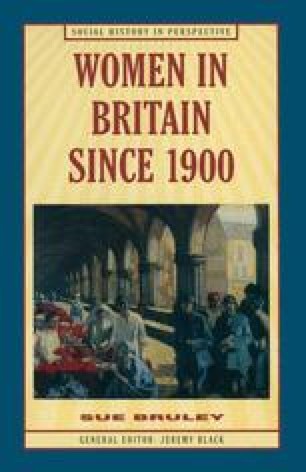 An integral part of ‘New Wave’ feminism of the 1970s was a realization that the dominant historical discourses were male centred and defined and that women were either marginalized or invisible. Since then a great deal of work has been done to recast what we know as ‘history’ to include recognition of gender difference and to record the changing lives of women. This project has explicitly rejected any essentialist view of femininity. Joan Scott, Denise Riley and others have shown the need to historicize gender.1 This enables us to view feminine identity as an historical construction which has been malleable and shifting over time, constantly being reworked and renegotiated, adapting to changing pressures and challenges. As we approach the end of the twentieth century it is apparent that there has been a transformation in femininity. It seems, therefore, an appropriate point to take stock of where we are at, to sum up ‘women’s century of change’. What did it mean to be a woman in 1900, how does it differ today and how did these changes come about? The aim of this book is to answer these questions by drawing on (selected) primary sources and specialist secondary texts to create a synthesis which will give us an overview of twentieth-century femininity in Britain.