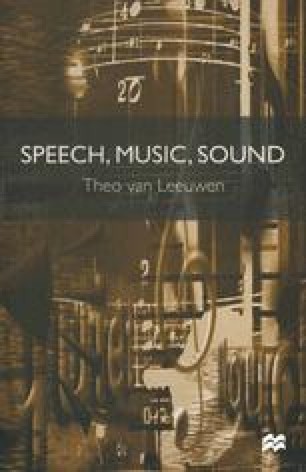 In ‘conversation analysis’ there is a rarely challenged assumption that people speak in turns. Harvey Sacks, who originated the most widely practised form of conversation analysis, sees it as a key rule of conversation: ‘At least and not more than one party talks at a time’ (quoted in Coulthard, 1977: 53). If people do talk at the same time, this is either a momentary slip, which will be corrected immediately, or a rude interruption. If no one talks, one of the speakers will fill the silence with ‘ems’, ‘ers’ and other ‘filler noises’, to claim it as part of his or her turn. The underlying rule of conversation, Western conversation at any rate, is that dialogue is strictly sequential, strictly linear — one speaker at a time. Hence conversation analysts pay particular attention to the way speakers get their turns, start their turns (for example do they interrupt the previous speaker, leave a gap after their utterances and so on), end their turns, and nominate the next speaker (cf. Pomerantz and Fehr, 1997), that is, to the whole ‘management’ of turn-taking. An important aspect of this is that the first speaker in what is known as an ‘adjacency pair’ is always to some degree at an advantage, simply because all speech acts have an ‘expected’ response (Halliday, 1985), and thereby constrain to some degree what the next speaker can reasonably say: a greeting must be followed by a greeting, a question by an answer, a statement by agreement and so on.