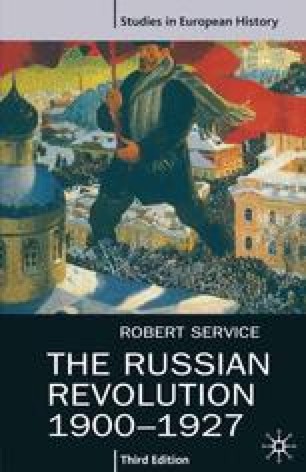 What explains the Bolshevik party’s survival in power? Official Soviet textbooks gave a single response: that the Bolsheviks under Lenin dealt wonderfully with the emergencies that occurred after 1917. Even though the party had not and could not have anticipated everything, its fundamental principles saw it through. Supposedly the Soviet government’s social and economic reforms made it permanently attractive to workers, peasants and military conscripts. The Bolsheviks, while disseminating pamphlets about their vision for a perfect future, adapted policies in order to fight the Civil War; and when the military struggle was over, they made concessions — by means of the New Economic Policy — and strengthened their position. Meanwhile they eliminated every real and potential direct challenge to their rule. The Bolsheviks had expected to be sustained in power by the spread of a ‘European socialist revolution’. But apart from temporary local outbreaks in Bavaria, Hungary and northern Italy, this continental revolution did not occur. The Bolsheviks were undeterred, and concentrated on building socialism in their own country. Their spokesmen claimed, then and later, that the party’s efforts were already a proven success within a decade after the October Revolution [22].