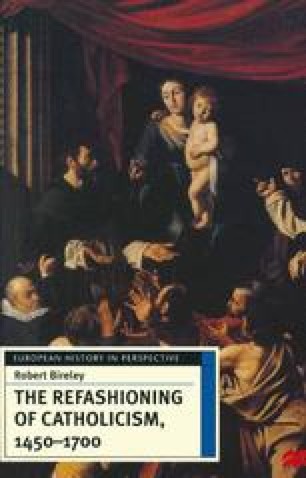 The Church, the States, and Religious Wars

The gradual emergence of the states and the decline of the Christian commonwealth or respublica christiana was a feature of late medieval and early modern Europe which the church, and especially the papacy, had to confront. The challenge of the states to the papacy dated from at least the fourteenth century, and it grew more intense as it became intertwined with conciliarism and Italian politics. The sixteenth-century papacy, in light of European expansion across the seas along with the Reformation, reaffirmed its universalist claims, and theologians pursued a new synthesis around the term ‘the indirect power of the pope’, that would, it was hoped, integrate papal claims with the advance of the state. The church and the papacy accepted the new world of the sovereign states, and for a time the papacy succeeded in operating within it, only to be excluded in 1648 at the Peace of Westphalia largely because of its own policy. By that time the wars of religion were coming to an end.