An Introduction to Linguistics 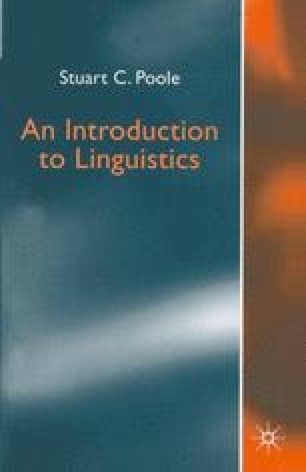 An Introduction to Linguistics pp 96-108 | Cite as

‘Hello, it’s me.’ That may be all that we need to hear to recognise somebody who rings us up if we know them fairly well, for no two people speak exactly alike. His or her speech profile has been shaped by such factors as where he or she grew up, by the kind of education that he or she received, by his or her occupation and by the same range of factors in respect of his or her parents. His or her speech profile is, of course, affected by whether it is his, or her, that is appropriate. It is affected by age. It is affected by many other physical differences that influence the individual’s acoustics, that make up the individual’s voice quality. The unique nature of a person’s speech is his idiolect., If, then, we played a recording of a bus driver in Bolton, Lancashire and a bus driver in Brighton, East Sussex it is likely that most people would be able to identify which driver was from which town if presented with the two alternatives. Similarly, most people could distinguish between a bus driver from Bolton and a judge from Bolton. In principle, then, a person’s idiolect can be plotted on a matrix with a regional axis and a social axis. A postman from Preston might be plotted as A on the matrix shown in Figure 8.1 while a doctor from Dover might be plotted as B.